The transfer of knowledge between Germany and Japan in the late Meiji and early Taishō eras: A case study of Georg Würfel (1880-1936) 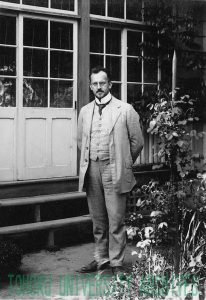 In the late Meiji era the system of hiring foreign contract workers (o-yatoi gaikokujin) to educate Japanese intellectuals came to an end. Instead of working at universities, foreign teachers were increasingly employed at university preparation schools (kōtō gakkō). In order to examine the German-Japanese transfer of knowledge in the late Meiji and the Taishō eras, this paper draws on an in-depth study of several German teachers living and working in Japan during this time. The research objective is to compare the situation of professors in Tokyo under the o-yatoi system to the situation of teachers at the new preparation schools.

This talk will focus on the example of Georg Würfel who came to Tokyo in 1906 as a missionary and stayed as a teacher in Sendai, Miyagi, until his death in 1936. While he is rarely ever mentioned by his contemporary fellow Germans in Japan in their writings, Würfel influenced several thousand Japanese students and he was often also their first contact with a foreigner.