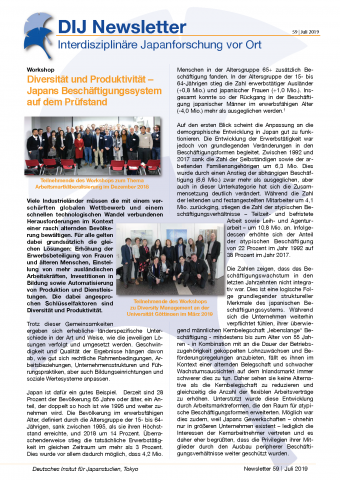 Report: Diversity and productivity – Japan’s employment system at the crossroads
Many advanced economies have to cope with increased global competition and fast technological change while being confronted with a rapidly ageing workforce. For all of them, basically the same solutions apply: increasing the labor participation of women and elderly persons, hiring more foreign workers, investing in education and training, and advancing the automation of production and services. The common key variables underlying or addressed by these measures are diversity and productivity.

New Era: Japan’s new era has a name: Reiwa
It was no April Fool’s Day joke: on April 1st, chief cabinet secretary Yoshihide Suga announced Reiwa as the new Japanese nengō (also gengō). On May 1st, 2019, the new Emperor Naruhito has ascended the throne on under this new era name which could be translated as “Rule Japan” or “administered peace”.

DFG-funded Research Project: Nanjing War Diaries
When Japanese troops in autumn 1937 advanced to the Chinese capital of Nanjing, the German representative of the Siemens Company, John Rabe (1882-1950), decided to remain in the city.