/ イベント / DIJ フォーラム / Creating a Society in which all Women Shine? 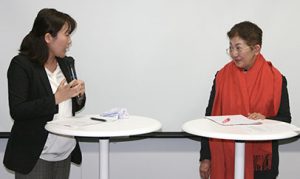 The lecture will be given in English. It will take place on Tuesday, November 17th 2015 at 6.30 – 8.00 p.m.at the DIJ.
After the presentation there will be time for Q&A and networking. Admission is free; please register by email with: forum@dijtokyo.org


Creating a Society in which all Women Shine?The Politics behind the Policies for the Advancement of Women

Contrary to widespread skepticism, the Abe government announced new policies for the advancement of women in society and is seemingly committed to promote and implement these policies. Yet, despite this impressive rhetorical commitment, many questions remain unanswered: What are the political motivations and strategies behind the “gender turn” of the Abe cabinet? What are the potential effects on Japan’s gendered political economic regime? Do we now witness a new era of concrete measures and ambitious gender equality polices in Japan, or is this all just cheap talk? The DIJ is honored to welcome two distinguished experts in the field as speakers to this DIJ Forum, who will discuss this topic from their respective perspectives as a former high-ranking government official on the one hand and as an academic, on the other hand.

Our first speaker, Haniwa Natori, has held many positions as a former high-ranking official for the Government of Japan. She will critically discuss the current agenda for the advancement of women and contextualize it within the larger framework of gender equality policies in Japan over time. The groundbreaking Basic Law for a Gender-equal Society (1999), as well as the second Basic Plan for a Gender-equal Society (2005) were drafted and decided by the cabinet during her terms as director of the Cabinet Office Gender Equality Bureau. After retiring in 2013, Ms. Natori is now President of Business and Professional Women (BPW) Japan as well as head of several gender equality advisory boards.

Yuki Tsuji, Associate Professor of Political Sociology in the School of Political Science and Economics, Tokai University, will contribute an academic perspective by focusing on the party politics behind the current policies for the advancement of women. Professor Tsuji is expert on gender politics of Japan, including the welfare regime changes, gendered relationships between the state and civil society, and the political representation of women. Her recent book is titled Kazoku-shugi Fukushi Rejimu no Saihen to Jendā Seiji [Restructuring of the Familialist Welfare Regime and Gender Politics], 2012, Kyoto: Minerva Shobo.