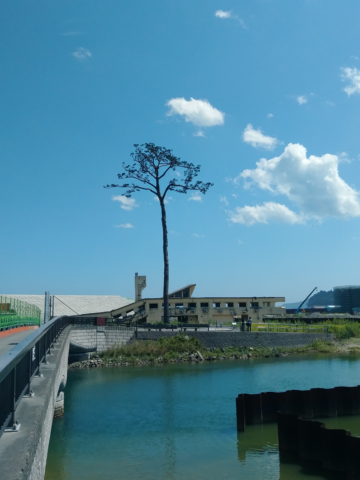 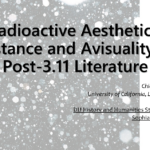 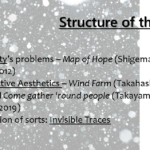 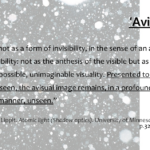 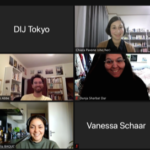 Among the first attempts to capture the Great East Japan Disaster, photographs and amateur videos have perhaps been the most prevalent. These responses are notable because they favor a certain mode of representation often associated with catastrophic events – one that relies primarily on sight and that privileges proximity, and a sense of immediacy and authenticity, over distance. Such close-range vision seems to also have extended its influence on other branches of cultural production, originating for instance several testimonial works and fictionalized travelogues chronicling the state of the disaster areas, which have been almost immediately absorbed under the label of ‘post-Fukushima literature’.

This talk explored the political stakes of modes of seeing and remembering through the lenses of proximity and transparency, while proposing a possible reevaluation of these concepts in the light of the Fukushima Daiichi nuclear disaster. Radiation, in fact, upsets spatial hierarchies and visual regimes in place by posing its own questions on positionality and representation. A possible, tentative answer to such queries might come from a careful consideration of recent directions in scholarship in new materialism and ecocriticism, and in the form of a kind of ‘radioactive aesthetic’. This mode of expression reveals an “impossible, unimaginable visuality” (Akira Mizuta Lippit, 2005), which might be inspired by radiation, but which more broadly embraces the invisible realms beyond human perception. Thanks to its poetics of avisuality and distance, radioactive aesthetic often attracts into its orbit literary works apparently removed from the catastrophe, thus proposing a corrective to the criteria of authority and proximity implicit in the process of canonization of works of ‘post-Fukushima literature’ – and of disaster literature in general.

About 30 participants from 3 continents, among them leading scholars in the field of post-Fukushima literature and culture, joined the talk and discussion which focused on central topics in literary representation of 3.11, such as tōjishasei, positionality, (a)visibility, and slow violence. It included analyses of recent works such as Takahashi Hiroki’s Fūryoku hatsudensho (Wind Farm, 2021).

Chiara Pavone is a Ph.D. candidate in Japanese Literature from the University of California, Los Angeles. She is currently a Yanai Initiative Visiting Research Fellow at Waseda University, and she is in the process of writing her dissertation on embodiment and the aesthetics of radioactivity in works of post-3.11 literature. Her research interests include ecocriticism, disaster studies and queer studies. She has recently published on notions of embodiment in two recent novels by Itō Seikō.