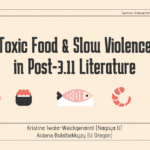 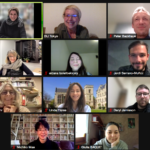 This presentation examined representations of food and feeding in post-Fukushima literature. Following the hydrogen explosions at the Fukushima Daiichi nuclear power plant, radioactive plumes swept across the country. As a result, Japan saw a sharp increase in radioactivity levels in a range of foodstuffs. Yet the government-sponsored Eat and Support campaign, designed to encourage the consumption of produce from northeastern Japan, failed to address contamination issues, giving the impression that economic recovery was prioritized over food safety aspects. In the ensuing decade, writing about food consumption, production, and feeding became one of the prime ways for authors to express political dissent. To illustrate this, the speakers read four texts published between 2012 and 2014 by Satō Yūya, Yoshimura Man’ichi, Kimura Yūsuke and Tawada Yōko through the theoretical lens of the Capitalocene. In this concept, capitalism is seen not merely as a mode of production, but as “a way of organizing the relations between humans and the rest of nature—that is as a system of nature, capital, and power” (Velednitsky 2017). Zooming in on representations of food and feeding, it was shown how the four authors expose, and explore, different aspects of the Capitalocene: they criticize authoritarian tendencies in the post-nuclear age, question conventional—highly gendered, highly exploitative—practices of food consumption as well as production, and challenge the idea of perpetual progress, be it economic, technological or in terms of human bodies. The speakers argued that by depicting acts of sabotage, or by imagining lives that escape the extractivist logic of our time altogether, Satō, Yoshimura, Kimura, and Tawada bring to life characters who refuse to provide cheap work, energy and lives to the capital in the dual sense, to Tokyo and to capitalist accumulation.

The talk not only provided an in-depth analysis of four important texts of post-Fukushima literature but also explained how the texts can be understood as critical interventions resisting dominant ideologies in society and politics including ecocriticism.

The event attracted more than 30 participants from Japan, the UK, Germany, and the US.

Kristina Iwata-Weickgenannt is an associate professor of Japanese modern literature at Nagoya University, Japan, whose work has focused on geographies of marginality and marginalization in contemporary Japanese literature. Her research is informed by the framework of gender studies, post-colonial literature studies, and eco-critical approaches to literature.

Aidana Bolatbekkyzy is a Ph.D. student of Japanese literature at the University of Oregon. In her work, Aidana examines the concept of non-carceral confinement in relation to contemporary Japanese literary dystopias by Kirino Natsuo, Tawada Yōko, Ogawa Yōko, Yoshimura Man’ichi and others.