/ イベント / DIJ フォーラム / Transforming Japan Into an Energy Rich Country - What Needs to be Done? 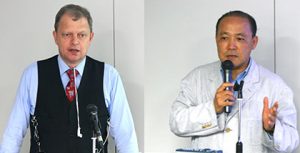 
Transforming Japan Into an Energy Rich Country - What Needs to be Done?

After the Fukushima nuclear disaster and the consequent shutdown of all nuclear reactors, Japan has been forced to re-consider its energy and climate policy speeding up the expansion of renewable energy and granting it a larger share in its future energy mix. However, a stronger reliance on renewables may not only be a necessity, it might also come as an opportunity, given the abundance of renewable energy resources in Japan and their increasing price competitiveness due to continuing technological advances. Can resource poor Japan, that presently imports more than 90 per cent of its primary energy supply, become an energy rich country? If so, what is needed to achieve such a fundamental transformation?

These questions will be addressed in the keynote delivered by Tomas Kåberger, Professor of Industrial Energy Policy at Chalmers University of Technology, Sweden, and Chairman of the Executive Board of the Japan Renewable Energy Foundation (JREF). An expert in the field of Physical Resource Theory and Environmental Science, Tomas Kåberger has a broad international background in academia, industry, environmental NGOs and policy making. From 2008 to 2011 he served as Director General at the National Swedish Energy Agency. He has just been nominated as outside director on the board of Vattenfall, one of the largest European electricity producers.

The keynote speech will be commented by Yasuyo Yamazaki, founder and CEO of Kuni Umi Asset Management, an investment fund focusing on renewable energy projects linked to regional development, and co-founder and representative director of the Sun-Based Economy Association, an NGO dedicated to the same area as Kuni Umi. After retiring from his position as Head of Goldman Sachs Asset Management Japan in 2002, Mr. Yamazaki has been involved in various Green Energy projects. He has been consulting local communities and the central government and written a number of books including Japan’s revival – A last scenario (Asahi Shinbun Shuppan 2012, in Japanese).