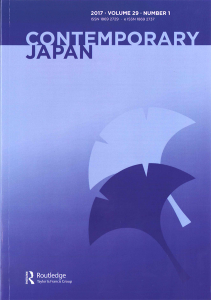 
ハノ・イェンシュ
Abandoned land, corporate farming, and farmland banks: a local perspective on the process of deregulating and redistributing farmland in Japan
解題を隠します


Whitelaw, Gavin H.
Of beans and bonds: Canadian farmers, Japanese buyers, and the moral economy of the non-GM soybean
解題を隠します