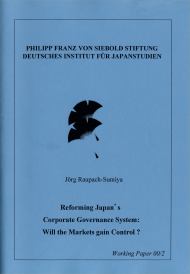 Issues of corporate governance have become a major center of attention worldwide both, in the academic world of economics, managerial and legal science as well as in the “real” world of management, legislation and politics. The discussion encompasses a broad and complex spectrum of issues, starting with normative questions of ownership and control of modern corporations and ending with highly practical matters such as the enforcement of bankruptcy rules. The design and functioning of corporate governance systems have a strong impact on decisions of individual investors, and thereby the access to and the cost of financial funds for companies as well as the allocation of capital in an economy.

Based on the narrower perspective of the finance model of corporate governance and within the analytical framework of institutional economics, this paper attempts to analyze the characteristic features of Japan’s system of corporate governance, its deficiencies and disfunctionalities which became apparent since the middle of the 1980s and the emerging directions and patterns of its reform. By giving a concise survey of the established literature on the Japanese governance system it is argued that the Japanese system operated for a long time under the economic logic of networks, combining effectively market forces of control with mechanisms of balancing power under the main bank regime. Changes in the regulatory framework, particularly in the patterns of corporate finance and in the functioning of capital markets have, however, caused a decline of network cohesion and led to a hollowing-out of the mechanisms of control. At the same time, growing pressures from product and capital markets to enhance corporate performance and shareholder value  call for a fundamental reform of the Japanese corporate governance system. In this paper the argument is made that–within the general tendency towards a stronger voice by institutional investors–the prevailing network governance system is loosing its clout, while three distinct patterns of reform of the Japanese corporate governance system are emerging: Global, independent firms with direct access to global capital markets seek strong relations with institutional investors and open their internal control systems; in firms with high financial leverage and a strong dependence on indirect finance, banks are expected to seek an enhancement of their power base through stronger ties; in young growth industries the (slow) development of an active market for corporate control is expected. The discriminating factors which determine these patterns are the type and ratio of equity ownership concentration and the leverage of corporate debt. These arguments are still rather speculative and it is too early to draw conclusions on which pattern of reform will become the mainstream mode of future Japanese corporate governance, mainly because the direction of the legal reforms in the regulatory environment is yet unclear.