/ イベント / DIJ フォーラム / Health Care in Japan: How Sustainable is the System? 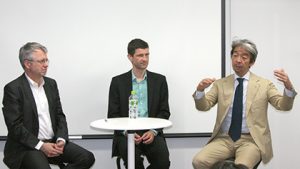 After the two presentations there will be time for Q&A. The event will be held in English. It will be followed by a small reception. Admission is free, registration is required at forum@dijtokyo.org


Health Care in Japan: How Sustainable is the System?

On its surface, Japan’s health system appears to be one of the world’s best. The country provides universal access to health care and scores well on most public health metrics. For example, the Japanese have the longest life expectancy and among the lowest infant mortality rates in the world, and they lose significantly fewer potential life years to disease than do the citizens of almost any other country. And Japan consistently spends less on health care than most other developed countries do.

However, Japan’s health system – like those in many other countries – is under severe stress. An increasing number of patients are finding it difficult to obtain the right care at the right time and place. The quality of care delivered varies markedly. Many of the cost-control measures the system has implemented have damaged its cost-effectiveness. The system’s funding mechanisms are insufficient to meet rising costs, and given the current economic situation, the country has few good options for meeting the funding gap. As a result, the sustainability of Japan’s health system is now in question, and decisive action is necessary.

Dr Ludwig Kanzler of Hanegi Solutions will explain how good Japanese health care really is, and where the fundamental issues lie. Formerly a partner with McKinsey & Company in Japan, he has researched the subject in depth and has worked with several prefectures to improve regional delivery of care. Dr Kanzler was educated at the London School of Economics and the University of Oxford and has been living and working in Japan for twenty years.

Dr Kenji Shibuya, Professor at The University of Tokyo will outline the vision for health care in 2035 which he has developed for the current Minister of Health, together with a team of young stakeholders. For the first time, the Ministry of Health has committed to a paradigm shift for how health care should in future be delivered and funded, addressing many of the core issues that threaten its sustainability. Dr Shibuya holds an MD from The University of Tokyo and a DrPH from Harvard University. He has worked as an MD in Cambodia and Rwanda and as a Health Economist for the WHO.