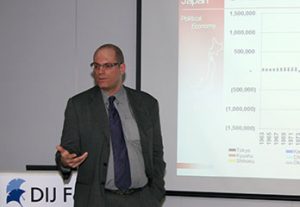 The lecture will be given in English. It will take place on Thursday, February 14th 2013 at 6.30 p.m. at the DIJ.
Admission is free but please register by email with: forum@dijtokyo.org

The political uncertainty of Japan’s post-Fukushima energy policy should not be surprising given the country’s energy constraints. Japan, an economic powerhouse operating within a geographically constrained landmass with virtually no independent energy sources to fuel and stabilize its economic needs, is trapped between two conflicting political problems: a growing segment of the Japanese electorate who reject essential facilities such as electric power plants and transmission wires being built in their backyards versus an equally large segment of the electorate who naturally expect a stable, environmentally safe and inexpensive flow of electric power to support their high standard of living and industrial production. That both expectations are technically and financially incompatible has led to the current political challenge.

This lecture places Japan’s post-Fukushima energy challenges and its public policy decisions into perspective by analyzing it in cross-national context. Using heretofore-unexamined archival documents, microeconomic data, and qualitative interviews with key actors in a time-series, this talk explores how and why governments in three developed democracies—Japan, Germany, and UK—pursue the reform of their electric power markets over a long period. The talk emphasizes how periods of stasis (controlled by positive feedback or self-reinforcement) in terms of “policy image” are occasionally offset by bouts of frenetic institutional change. Variations in deliberation timetables, shifting voting patterns in committees, sporadic law promulgation, increasingly negative public opinion polls, and fluctuating media attention cycles (the dependent variables) are analyzed by using the ubiquity, consistency, and strength of foreign economic ideas and events (the independent variables) to explain the transformation of both formal and informal institutions in Japan. Should a media-transmitted image shift be the principal factor behind crisis-induced agenda-setting and decision-making behavior, this talk explores the “real-world” financial, environmental and technological trade-offs of policy objectives prioritizing renewable energy over nuclear power and fossil fuels.

Paul J. Scalise is JSPS Research Fellow at the Institute of Social Science, University of Tokyo, and Non-resident Fellow at the Institute of Contemporary Asian Studies, Temple University, Japan Campus. He received his Ph.D. in comparative political economy from the University of Oxford, an M.A. in international economics and Japan studies from the Johns Hopkins University School of Advanced International Studies (SAIS), and his B.A. in political science from Marist College. A former Tokyo-based financial analyst of Japanese energy companies and contributing energy analyst to several global consulting firms, Dr. Scalise was voted by institutional investors the number-one ranked Japanese utilities analyst in 2001 among all UK financial institutions. He has published more than 100 research reports, consulting briefs, reviews, journal articles, book chapters, encyclopedia entries, and OpEds in locations such as Foreign Policy, Newsweek, and Asahi Shimbun.