/ 主要著作 / ワーキングペーパー / Happiness from the Viewpoint of Economics: Findings from Recent Survey Data in Japan 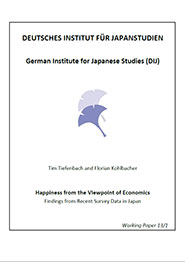