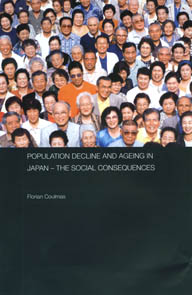 Kingston, Jeff
The challenges of an aging society The Japan Times
p. 13

Population Decline and Ageing in Japan - The Social Consequences [日本における人口の減少と高齢化－社会の結末]

This book presents a comprehensive analysis of one of the most pressing
challenges facing Japan today: population decline and ageing.

It argues that social ageing is a phenomenon that follows in the wake
of industrialization, urbanization and social modernization, bringing
about changes in values, institutions, social structures, economic
activity, technology and culture, and posing many challenges for the
countries affected. Focusing on the experience of Japan, the author
explores: