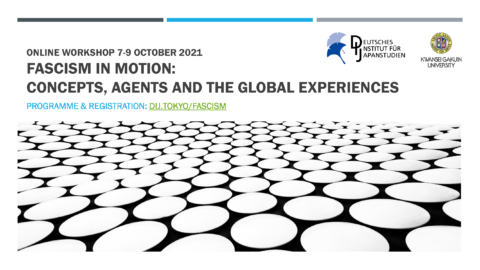 
Fascism in Motion: Concepts, Agents and the Global Experiences

It is widely known that beyond the cases of Italy and Nazi Germany, a variety of patterns of fascism and authoritarianism took shape as responses to the unprecedented economic slump and social unrest during the interwar period. However, until recently, the mainstream studies of fascism movement are still laying the focus on cases of the European countries. As a matter of fact, ideas, beliefs and ideologies of fascism circulated through the transnational agents, and forged a network of knowledge that distributed fascist ideas far beyond the Axis powers. In the local contexts, these ideas were selectively appropriated and creatively recontextualized by the local intellectuals and policy makers in order to solve their own social crisis.

By shedding light on regions that remain underrepresented in hitherto fascist studies, this workshop aims to trace the border-transcending circulation of ideas and concepts derived from fascism and grasp its transnational character. With the case studies zooming in on regions such as China, Japan, India, Cambodia, Thailand, Brazil, Romania and so forth, this workshop showcases the large-scale border-crossing movements of agents between countries and regions over different parts of the globe, analyzes the political and cultural negotiations between nations, and explores the multi-layered and reciprocal intellectual inspirations of agents from various backgrounds.

Chinese Fascism and its Development: The Case of the Guomindang Fascist Organizations, the Lixingshe Society (1927-1937)

The Gestapo Myth: Josef Meisinger and the German-Japanese Police Cooperation in East Asia

Fūdo, Volksgeist and the “Japanese Economy” of the Totalitarianism: The Wartime Economic Thought of Naniwada Haruo

‘Any Port in a Storm’: Rethinking the Interpretations of Fascism(s) from Colonial India

Weeds Among the Wheat: Fascism and the Radicalization of the Youth

Ibero-American Fascisms: Networks and Influences of the Brazilian Integralism and Falangism in the Atlantic World

Mediterranean Fascisms: The Transmission of Authoritarian Political and Economic Ideas at the Intersection of Europe with The Global South

The Road to Royal Dictatorship in Interwar Romania: Rising Fascism and the Case of the Iron Guard

Genuine Fascist Theory or Non-Systematic Conceptualizations of the New Authoritarian Order? Towards an anatomy of Nikolaos Koumaros’ antiparliamentarian thought

The Lure of Fascism: winding paths to radicalization of Croatian nationalists during interwar period

Unlearning Fascism: Why did Japanese Scholars of Japanese History Stop Using the Concept of Fascism?

Necropolitics and the influence of Axis Powers: The Case of India