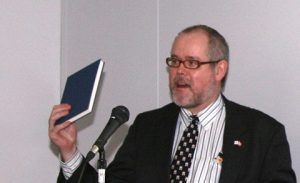 The lecture will be given in English. It will take place on Thursday, January 12th 2012 at 6.30 p.m. at the DIJ.
Admission is free but please register by email with: forum@dijtokyo.org

This presentation engages claims that since 9/11 Japanese public opinion has turned sharply away from pacifism and toward supporting normalization of Japan’s military power, in which Japanese troops would fight alongside their American counterparts in global conflicts. Midford argues that Japanese public opinion has never embraced pacifism. It has, instead, contained significant elements of realism, in that it has acknowledged the utility of military power for defending national territory and independence, but has seen offensive military power as ineffective for promoting other goals – such as suppressing terrorist networks and WMD proliferation, or promoting democracy overseas. Gradually, these realist attitudes have become more evident as the Japanese state has convinced its public that Tokyo and its military can be trusted with territorial defense, and even with noncombat humanitarian and reconstruction missions overseas. On this basis, we should re-conceptualize Japanese public opinion as attitudinal defensive realism. Finally, this presentation considers the evolution of public opinion toward security under DPJ rule.

Paul Midford is Associate Professor of Political Science at the Norwegian University for Science and Technology (NTNU) in Trondheim, and Director of the NTNU Japan Program.  He received his PhD. in Political Science from Columbia University in 2001. Midford specializes in Japanese foreign and defense policies, and the impact of public opinion and domestic politics on policy. He is co-editor with Robert Eldridge of Japanese Public and the War on Terrorism (Palgrave Macmillan, 2008), and authored Japanese Public Opinion and the War on Terrorism:  Implications for Japan’s Security Strategy (EastWest Center Washington, 2006). His latest book is Rethinking Japanese Public Opinion and Security: From Realism to Pacifism? (Stanford: Stanford University Press, February 2011).