/ Events / DIJ Forum / Three Myths about the Japanese Red Army: What you Think you Know is Probably Wrong! 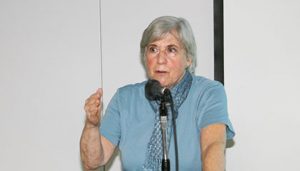 
Three Myths about the Japanese Red Army: What you Think you Know is Probably Wrong!

Public understandings about the Japanese Red Army (Nihon Sekigun) are based largely on information promulgated by the Japanese government and circulated widely by mass media during the nearly three decades that its members were beyond reach in the Middle East. The participants have contributed to the myth-making, both by their public writings and by what they did not reveal. Some pieces of contradictory information have been available for a long time, but many blanks were filled in with widely circulated myths. Even scholars who studied the group have perpetuated mistaken views based on the limited information available.

The formal dissolution of Nihon Sekigun and a set of new trials of returnees from 2000 to 2010 have now made it possible to construct a rather different picture of the group. The dissolution freed members and former members to talk about internal aspects of the organization that they had kept secret for decades. In a new book in progress, Dr. Steinhoff is examining the recent material in light of her four decades of research on the various branches of the original Sekigunha. Her research includes prison interviews, participant observation of trial sessions and the activities of trial support groups, and extensive reading of the group’s writings in Japanese. Her talk will debunk several widely believed myths about the Japanese Red Army and analyze the origins and implications of these myths.

Patricia Steinhoff is Professor of Sociology at the University of Hawaii. She holds a BA in Japanese Language and Literature from the University of Michigan (1963) and a PhD in sociology from Harvard University (1969) and has taught at the University of Hawaii since 1968. Her primary research interest is social movements, civil society, and radical left groups in Japan. She has written over ninety articles and book chapters, and is the author or editor of twenty books. Her latest edited book is Going to Court to Change Japan: Social Movements and the Law, which is forthcoming this summer from the University of Michigan Center for Japanese Studies. Her most recent article is “Memories of New Left Protest” Contemporary Japan, Journal of the German Institute for Japanese Studies 25:2, Fall 2013.