/ Publications / Videos / Pictures at an Election 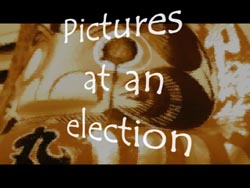 Pictures at an Election

“Pictures at an Election” (the title refers to Mussorgsky’s suite “Pictures at an Exhibition” which features prominently in the film) is a 68 min. documentary that covers the campaigns of those candidates who tried to win one of the five seats in Tokyo during the Upper House election in 2007. It shows Japan’s electoral machinery in full steam and focuses on the question of how Japanese candidates try to appeal to voters. The documentary depicts different strategies and techniques, and presents a lively picture of political culture in Japan.

„Pictures at an Election“ was filmed virtually “single-handedly” by political scientist and then DIJ senior research fellow Axel Klein (now Duisburg-Essen University, Germany) during the 17 days of electoral campaigning in July 2007. On most days he spent 15 hours out on the streets of Tokyo, from Kita-Senju in the Northeast to Futago-Tamagawa in the Southwest, following the major candidates on their campaign trails. The daily route was mostly decided on the basis of information collected from the election headquarters of the candidates. After conducting interviews with many of the politicians featuring in the documentary, Klein edited the many hours of material between August 2007 and March 2008.

“Pictures at an Election” for Educational Institutions
The German Institute for Japanese Studies believes that this documentary can be an essential supplement to all attempts to teach and understand the way Japanese politicians tick during election time.

The documentary is therefore subtitled in English and will be distributed for free to all educational institutions which request a copy. If you would like to receive a copy or if you have any questions concerning the film, please email to: election@dijtokyo.org.

UPDATE (February 2021) Since the pandemic has made on campus teaching impossible and online access to teaching material has become indispensable, the DIJ and Axel Klein have decided to publish the documentary on the DIJ’s YouTube channel. Coincidentally, the (unintended) protagonist of the documentary, Marukawa Tamayo, became Minister in charge of Women’s Empowerment and Gender Equality and Minister of State for the Tokyo Olympic and Paralympic Games in February 2021. This documentary shows how she started her political career with her first election campaign.

The complete script of “Pictures at an Election” can be downloaded for free as a PDF-file (253 kb).

Among others, “Pictures at an Election” has been requested by and sent out to these institutions so far:

Israel
Department of Political Science, The Hebrew University of Jerusalem