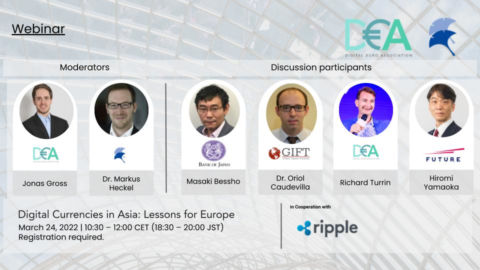 in cooperation with the Digital Euro Association 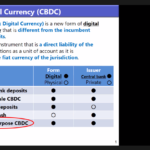 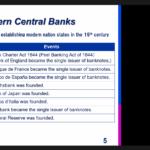 A full video of the event is available on YouTube

Central banks around the world have stepped in and intensified their efforts to conceptualize and design their own digital currencies, i.e., central bank digital currencies (CBDCs), in particular, as a reaction to the increased competitive dynamics by the cryptocurrencies and stablecoins. Asia has a particular importance and critical leading efforts in this space with various Asian central banks assessing and experimenting with CBDCs. For instance, China has launched pilot programs and trials of its digital currency project e-CNY. Goals of the e-CNY include to provide a convenient, yet more efficient, resilient and secure retail payment system to increase financial inclusion and preserve monetary sovereignty. Further, fair competition and interoperability should be promoted. As another example, the Bank of Japan is in the proof of concept stage regarding their own digital currency. Additionally, the Japan Digital Currency Forum as a consortium of around 70 Japanese firms, including the country’s three largest banks, is also working on a yen-based digital currency, tentatively called “DCJPY” for Japan’s private sector to complement the central bank’s efforts.

This joint webinar of the Digital Euro Association and the German Institute for Japanese Studies focused on various efforts in Asia around digital money, stablecoins and CBDCs, and addressed the following questions among others: