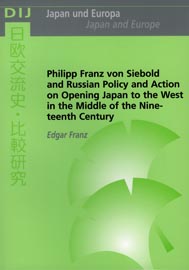 Renner, Andreas
Philipp Franz von Siebold and Russian Policy and Action on Opening Japan to the West in the Middle of the Nineteenth Century Jahrbücher für Geschichte Osteuropas 55 (2007)
pp. 431-432

Edgar Franz deserves credit for having been the first to use Siebold’s private papers and manuscripts to provide a detailed analysis of his influence on Russia’s policy on opening up Japan. Franz proves that Siebold’s intimate knowledge of Japan and his sensitive attitude to the Japanese mentality were crucial to Russian negotiations. Subsequently Russia was the first foreign nation to succeed in concluding a treaty with Japan that included establishing trade relations between the two nations. It has been possible to verify Siebold’s significance for the modernization of Japan, the political dimension of Japan’s activities and Siebold’s great influence on the opening of Japan for trade and navigation.