/ Publications / Monographs /   1945 in Europe and Asia: Reconsidering the End of World War II and the Change of the World Order 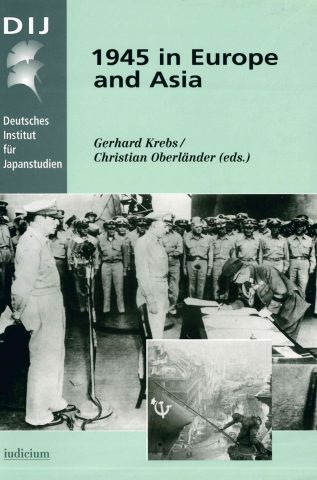 1945 in Europe and Asia: Reconsidering the End of World War II and the Change of the World Order

Marking the passage of fifty years since the end of the Second World War, a symposium entitled “1945 in Europe and Asia – Reconsidering the End of World War II and the Change of the World Order” was held at the Japanese-German Center Berlin in 1995. It brought together twenty-one speakers to discuss events at the end of the war and subsequent developments in seventeen countries, East and West. Volume 19 of the monograph series of the German Institute for Japanese Studies provides a comprehensive account of the conference, drawing numerous parallels and elucidating historical links between the two regions of the world. It is clearly demonstrated that for all parties involved, decision-making in Europe was influenced by events in Asia, and in Asia by events in Europe.The conclusion thereby being reinforced is the oneness of European and Asian history, at least since the twentieth century.

The substance of the essays covers a broad range of historical processes, focusing more on political than military events. Occupation policy in both Germany and Japan is included, along with the influence of the Axis and Allied powers in Asia and Europe, the rise of nationalism in Southeast Asia and the resulting political and social upheavals.

Semirjaga, Michail
The USSR and Germany - From Military Confrontation to the Foundation of Two German States

Petersen, Jens
Italy: From the End of Fascism to the Postwar Structure

Zyblikiewicz, Lubomir W.
Poland - From Liberation to the Establishment of Communist Rule

Slavinsky, Boris
The USSR and Japan: From Neutrality to War and from War to Peace

Chen Jian
China in 1945: From Anti-Japanese War to Revolution

Nish, Ian
Britain, the End of the War in Asia and the Transformation of Empire

Goto Ken'ichi
A Comparative Study of Decolonization in Indonesia and Malaya

Jose, Ricardo
The Philippines: From occupation and Japanese 'independence' to independence