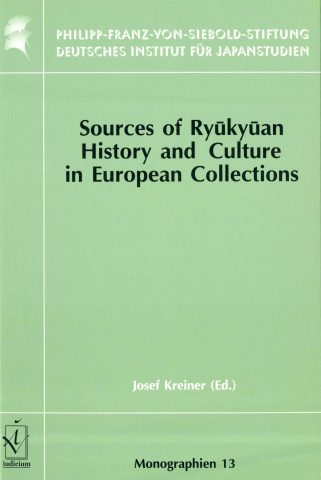 Sources of Ryūkyūan History and Culture in European Collections

The Kingdom of Ryūkyū was, from its beginnings in the middle ages up to 1879, besides the Yamato State, the Heian Court or the shogunates of Kamakura, Muromachi and Edo, the only other independent political entity on the Japanese islands. It developed its own standard language, the Shuri language (or dialect) with roots in the Heian era. It also developed its own value system quite different of what we consider the ‘Japanese’ value pattern. And it had its independent history with intensive contacts with China and the Korean Peninsula, and for more than two centuries also with Southeast Asia and various European countries.

The present volume, which comprises papers read at the International Symposium, ‘Sources of Ryūkyūan History and Culture in Europe’ (Bonn 1994), aims at two fields of study of the German Institute of Japanese Studies in Tōkyō: First, by surveying existing sources on Ryūkyū in European collections, a very special part of  the historic contacts between Germany/Europe and Japan/Okinawa could be re-examined. Second, studies of these cultural relics may help to understand better the special history and culture of Okinawa within its Japanese framework.

Kreiner, Josef
Notes on the History of European-Ryukyuan Contacts