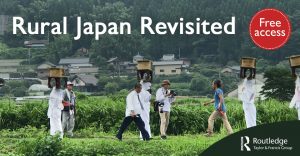 This virtual special issue is dedicated to contemporary studies exploring a Japan beyond the country’s metropolitan areas. Over the past decades, rural Japan nearly vanished from the Western research agenda, as urban Japan had come to dominate the attention of most social scientists studying contemporary Japan. Particularly the cityscape of Tokyo, the epitome of the Asian mega-city, has shaped the popular cultural imagination of Japan from abroad to an extent that the countryside, if seen at all, acquires all qualities of a museum or cultural repository of the past. Yet it should not be forgotten that millions of Japanese continue to live in quite different social spaces, such as hamlets, villages, or rural towns in mountainous and coastal areas. Even though urbanization, consumption and media usage have left their imprint on everyday life, social values and behavior rules in even the most remote part of the country, there is ample reason to take the urban-rural divide as a meaningful line of distinction between the two structurally different and inherently distinct spheres of city and countryside.

This virtual special issue has been compiled as a reminder of the significance that life and living in regional Japan is having for an adequate understanding of contemporary Japan, the changing faces of the “rural imaginary” (Schnell 2005) and the plurality of lifeways in late-modern society.