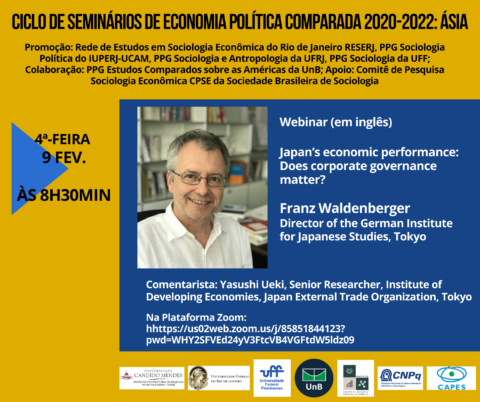 How is the underperformance of Japan’s economy during the past two decades related to corporate governance? Upon invitation by the Instituto Universitário de Pesquisas do Rio de Janeiro (IUPERJ), DIJ director Franz Waldenberger discussed this question within the IUPERJ’s Comparative Political Economy Webinar Series: Asia 2020/2022. In his talk, Franz outlined Japan’s recent corporate governance reforms and explained their limited influence on the performance of Japan’s economy. By Japan’s ‘performance puzzle’, he refers to the country’s relatively low GDP per capita despite its excellent resource conditions. In his analysis, Franz demonstrated that institutionalized in-house careers which worked well during Japan’s economic and technological catch-up period now obstruct resource allocation at the company, industry, and international levels. In conclusion, he suggested that corporate governance reforms will only be successful if they contribute to the establishment of market based careers for higher ranked managers. The full talk, including comments by Yasushi Ueki (IDE-JETRO), can be viewed on YouTube.