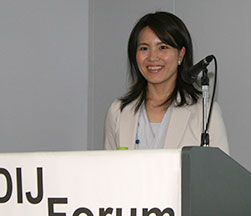 The lecture will be given in English. It will take place on Thursday, April 5th 2012 at 6.30 p.m. at the DIJ.
Admission is free but please register by email with: forum@dijtokyo.org


Happiness in Japan before and after the Great East Japan Earthquake

This paper presents the results of a panel survey (N=10744) that examines how the Great East Japan Earthquake of March 2011 has affected the happiness of young people in Japan outside of the afflicted area. Our dataset consists of Japanese in their 20s and 30s from all non-afflicted prefectures. We conducted two surveys on happiness – one before the earthquake (December 2010) and one after (March 2011). The results suggested that about half of the Japanese youth have changed their life values after the earthquake even though they were not in the afflicted area, especially in terms of valuing social connectedness and ordinary life. In addition, people who were thinking about the earthquake when they completed the second survey were happier after the earthquake, showing that reflecting on the earthquake had prompted them to reevaluate their definition of global happiness. They also experienced temporary negative emotional reactions more frequently after the earthquake.

Yukiko Uchida is Associate Professor of Cultural Psychology at the Kokoro Research Center at Kyoto University. In her research she has been concerned with happiness, emotion, relationships, and culture. Her numerous publications are a priceless contribution to the analysis of the meaning of happiness in Western and Eastern cultural context. She received her Ph.D. in Social Psychology from Kyoto University in 2003. Since 2010, she is a member of the Study Commission on Happiness of the Japanese Cabinet Office.