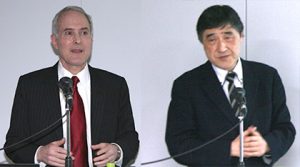 Japan has finalised a corporate governance code for all corporations listed on Japan’s major stock markets. The Code is based on the comply-or-explain principle. Will it change the way Japanese corporations are governed? This question will be taken up by two speakers who have been involved in the consultations leading up to the Code, although they do not necessarily share the same views. In his introductory statement, Mr. Benes will explain how the Code came about and what possible impacts he expects. Mr. Seki will comment and add his insights and perspectives. After both speakers have exchanged their views, the discussion will be opened to the floor. The Forum will close with a reception to allow for further discussions and networking.

Nicholas Benes is the Representative Director and founder of The Board Director Training Institute of Japan (BDTI), a “public interest non-profit” organization certified by the Japanese government. Mr. Benes is a lawyer and MBA by training (Stanford and UCLA). After serving at JP Morgan as an investment banker, he founded an M&A advisory boutique in Japan and later served on a number of Japanese boards as an outside director. A twice-elected governor of the ACCJ, Mr. Benes has been active on various government advisory committees  related  to  FDI and  corporate  governance.    In  2013,  he  proposed  to  LDP leaders that they adopt a corporate governance code as part of the growth strategy.

Takaya Seki is the Managing Director of Corporate Practice Partners, where he supports government departments, public pension funds, and stock exchanges in their efforts to promote better corporate governance. He also teaches about corporate governance at Meiji University and Reitaku University, and serves as an outside director at Anritsu Corporation. A graduate of Imperial College London, he previously held positions in banking (Toyo Trust) and research (NTK Research, at Mizuho Financial Group). Dr. Seki has published many articles and books in both Japanese and English and serves on government committees related to governance and gender equality.

Franz Waldenberger, Director of DIJ, will moderate the discussion.