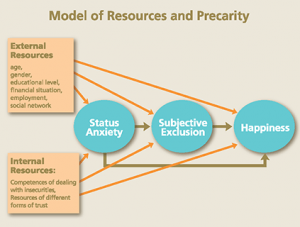 Over the past decade, a new awareness of social inequality has emerged in Japan. The so-called gap society (kakusa shakai) has become a dominant topic in the media as well as the public and academic discourse. The topic’s popularity is closely connected to an individual fear of social decline on the micro level. Statistics show that the Japanese outlook on the future is rather bleak: 29% assume that their standard of living will worsen in the future – in 1992 only 10% had been of that opinion. Likewise, the share of Japanese who feel worried or insecure in their daily life has grown continuously since the early 1990ies and reached 70% in 2007. “Happiness” in a sense of subjective well-being seems to have become an increasingly rare commodity in contemporary Japan.

This raises the question as to what extent a subjective perception of one’s social status is actually congruent with one’s objective positioning in the social system. Recent sociological discourse on social inequality starts to pay attention not only to objectively precarious living conditions. A strong influence on individual courses of action is also ascribed to the subjective perception of social status. Who perceives themselves as socially integrated, who as excluded? Which factors are responsible for an evaluation of one’s position? Access to financial resources? Participation in social networks? Personal skills in comparison with others? Which interrelationships do exist between the different factors?

Just as in Japan, also in Germany the increasing precarity of living conditions is a prominent topic in the media as well as the academic discourse. In order to reach a better understanding of the interrelationship between discriminating positions of marginalization and subjective perceptions of social exclusion, researchers at the University of Kassel, Germany, developed a theoretical model which combines external and internal resources, objective exclusion and precarity as well as subjective perception of exclusion to one interactive system. In cooperation with the DIJ, the theoretical model will be tested in an empirical survey simultaneously in Germany and Japan. Thereby, it will not only be possible to analyze the interrelationships of the different factors in the respective country, but also to compare cross-culturally. Research at the DIJ will focus on the Japanese part of the survey.

For more information on the survey and results, please refer to Sources and Reference Materials.


May 19, 2009
Workshops
"Comparatively Happy" – Objective precarity and perception of social exclusion in Germany and Japan: Discussion of the German and Japanese Questionnaire