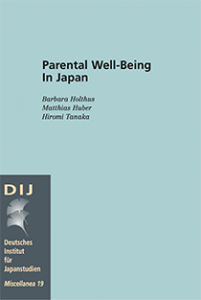 In August 2013, the news media reported that a survey from June 2013, conducted by Japan’s Cabinet Office, revealed that 71 percent of the re- spondents (6,075 people age 20 and up) were “satisfied” or “reasonably satisfied” with their lives (Cabinet Office 2014a). Yet, in international comparison, Japan’s level of life satisfaction is low. According to the OECD Better Life Index, Japan ranks 27th out of 36 countries, a ranking that has declined steadily over the years (OECD 2013). Furthermore, people who have children may be less satisfied than those who do not. A 2012 Cabinet Office survey on well-being of young parents in their twenties and thirties found that female respondents who are mothers are less satisfied with life than those who are not mothers. Interestingly, no such dif- ference could be seen between male respondents who are fathers and those who are not. The difference between mothers and fathers, however, is striking – with mothers having lower life satisfaction than fathers (Ueda and Kawahara 2013). So why does the life satisfaction of Japanese parents – particularly mothers – seem low compared to those who are not parents?

In Japan, like in other post-industrialized societies, expectations for “successful” parenting are much higher today than they were three or four decades ago (for the case of Germany, see Bertram and Spiess 2011). Additionally, raising a child has become more costly in terms of both time and money. These elevated costs, together with the rising opportunity costs for women opting for motherhood, are strongly correlated with the fertility rate in Japan (Ogawa et al. 2009). As the country’s low fertility rate is considered a major demographic problem by policy makers, it is imperative that they better understand parents, particularly those with young children who require a high degree of care.

Our study examines parental well-being in depth by asking (1) what influences the levels of happiness and life satisfaction of mothers and fathers in contemporary Japanese society, (2) what elements of parents’ lives – such as health and stress, personality, employment situation, material standing, education level, partnership and/or social networks – influence their well-being, and (3) how Japanese family policies fare in this relationship.