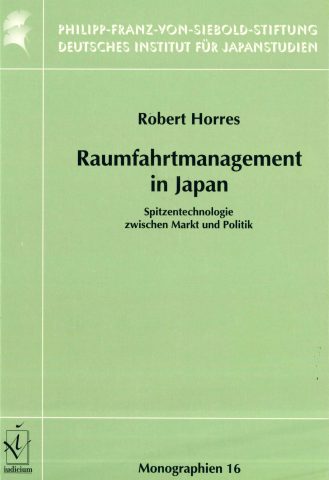 When at the beginning of the 1980s Japan stood at the international pinnacle in a range of technological fields, it became apparent that the transfer of technology from abroad as the basis of development had reached its limit. To secure long-term competitiveness on the world market, it thus became increasingly important for Japan to develop its own technology. Meeting this requirement could only be accomplished by adapting existing techno-political guidelines and the institutional framework.

In June 1996, Japanese, European and American experts met for a workshop series initiated by the DIJ to discuss recent developments in Japan. It was shown that in a wide range of technological fields there has been a new orientation, in both institutional and political-strategical domains – changes that come clearly to the fore in this DIJ monograph.

In recent years, Japan has been determined on expanding its own aerospace programme, thereby becoming a technologically autonomous space power. In doing so, it has also succeeded, with a relatively small expenditure of state funds, to secure the cost-conscious development of space technologies, whilst the high standards of quality necessary in astronautics have been safeguarded. Analysis shows that the moulding of technical change in the Japanese astronautic system is determined in large measure by the underlying industrial and political structures. The systemic interrelations that emerge in this study throw new light on Japan’s future contributions to international commercial astronautics.

The study is divided into three parts. First, a structural analysis is conducted of the Japanese space sector for the years 1955-1994. After a short historical overview, the analysis focuses on the organizational structure formation and programme development. The most important astronautic projects are also presented. The second part is concerned with Japanese space policy, demonstrating results and perspectives of the Japanese astronautic programme. Finally, in the third part, conditions and strategies for astronautic management are discussed, with an attempt made at an evaluation.