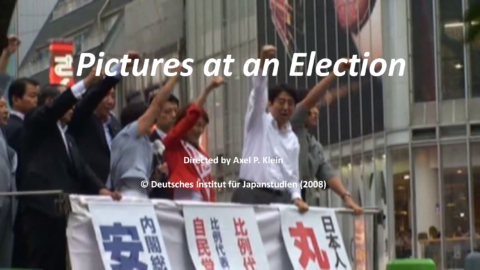 Pictures at an Election is a 68 min. documentary that shows Japan’s electoral machinery in full steam and focuses on the question of how Japanese candidates try to appeal to voters. It depicts different strategies and techniques, and presents a lively picture of political culture in Japan. It was filmed by political scientist and then DIJ senior research fellow Axel Klein (now Duisburg-Essen University, Germany) during the electoral campaigning in July 2007. Until today the documentary has been distributed for free to more than 100 universities all over the world. Since the pandemic has made on campus teaching impossible and online access to teaching material has become indispensable, the DIJ and Axel Klein have decided to publish the documentary on the DIJ’s YouTube channel. Coincidentally, the (unintended) protagonist of the documentary, Marukawa Tamayo, became Minister in charge of Women’s Empowerment and Gender Equality and Minister of State for the Tokyo Olympic and Paralympic Games in February 2021. This documentary shows how she started her political career with her first election campaign. Details