‘The Visible College of Urbanists’: Imagining Tokyo as a World City 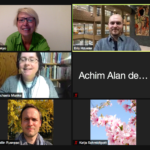 Cities around the globe experienced a transformative period in the 1960s. Tokyo’s population surpassed the 10 million threshold, its citizens benefited from the Japanese economic miracle and the 1964 Olympics symbolized Japan’s return to the global stage. Although the world’s largest metropolis struggled with negative consequences of rapid urbanization (air pollution, congestion, water shortages), its future was seen with great optimism. At the World Design Conference in 1960, architects presented a multiplicity of urban futures for Tokyo. The Tokyo Metropolitan Government launched international marketing endeavors and engaged in inter-city diplomacy. International airlines promoted the city as a jet-age destination and a series of luxury hotels were constructed in anticipation of visitors from all over the world. All these examples represent imagined futures (Jens Beckert) that help explain the dynamic development of capitalist societies.

This presentation characterized Tokyo as a world city in the making in the 1960s and introduced several of the imagined urban futures described above. Empirically, it focused on the journal Ekistics that was launched in 1957 and has been addressing “the problems and science of human settlements” since then. The monthly issues of Ekistics offer unique insights into the global discourse on architecture, planning and urbanism. A review of the articles revealed how various contemporaries reacted to the tremendous urban transformations. The voices range from members of ‘the visible college of urbanists’ like architects Kenzo Tange and Fumihiko Maki to Tokyo’s ragpickers. Through the specific lens of Ekistics, Tokyo as a world city in the making can be observed, revealing a process without a predetermined trajectory embedded in the global exchange of knowledge.

The talk offered fascinating insights into imaginations of Tokyo’s urban future from the 1960s. It discussed conflicting images ranging from jungle city, pedestrian paradise, and uncontrollable metropolis to the ideal of a global city. 22 participants, including experts in the field of architectural history, attended Eric’s talk.

Eric Häusler is a Research Fellow at the Institute of Comparative Culture, Sophia University. His doctoral research was part of the Swiss National Science Foundation (SNSF) Sinergia Project “Doing House and Family” at the University of Bern, where he completed his PhD thesis on the Bernese bankruptcy regime 1750-1900 in March 2020. His postdoc research project is titled “World Cities in the Making: Past Urban Futures of Tokyo, New York and Zurich in the 1960s”. Eric’s research interests include global urban history, the concept of temporality, historical sociology and economic history.