/ Forschung / The Sociology of Pets in Contemporary Japan

The Sociology of Pets in Contemporary Japan 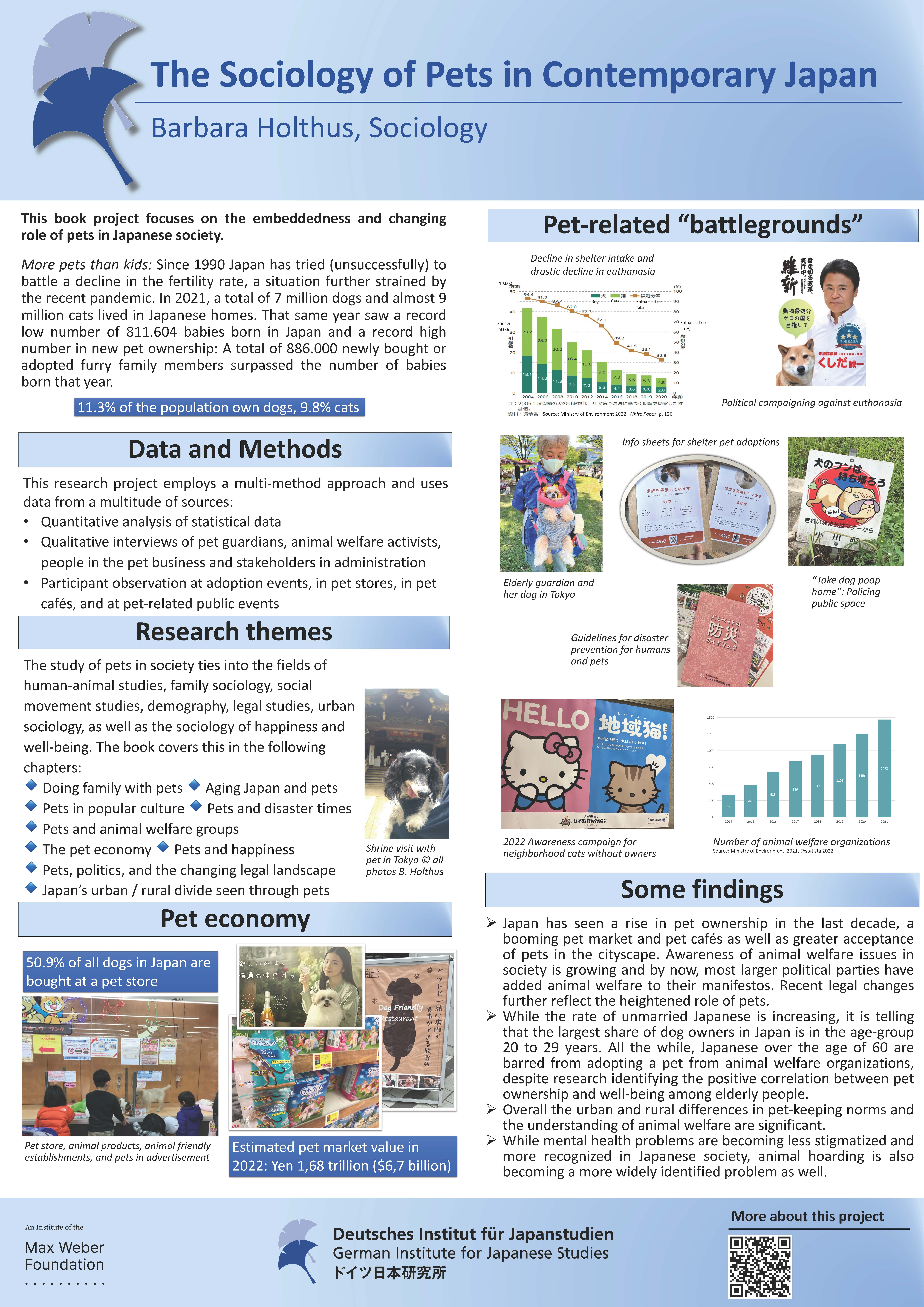 The Sociology of Pets in Contemporary Japan

This book project focuses on the embeddedness and changing role of pets in Japanese society.

More pets than kids: Since 1990 Japan has tried (unsuccessfully) to battle a decline in the fertility rate, a situation further strained by the recent pandemic. In 2021, a total of 7 million dogs and almost 9 million cats lived in Japanese homes, that means 11.3% of the population own dogs, and 9.8% of the population own cats. That same year saw a record low number of 811.604 babies born in Japan, all the while the year saw a record high number in new pet ownership: a total of 489.000 cats were bought or adopted plus 397.000 dogs. A total of 886.000 furry family members thereby surpassed the number of babies born that year.

This research project employs a multi-method approach and uses data from a multitude of sources:

The study of pets in society ties into the fields of human-animal studies, family sociology, social movement studies, demography, legal studies, urban sociology, as well as the sociology of happiness and well-being.

The book will cover this in the following chapters:

Some early findings of this book project are that Japan has seen a rise in pet ownership in the last decade, a booming pet market and pet cafés as well as a greater acceptance of pets in the cityscape. Awareness of animal welfare issues in society is growing and by now, most larger political parties have added animal welfare to their manifestos. Recent legal changes further reflect the heightened role of pets.

Furthermore, at a time when the rate of unmarried Japanese is increasing, it is telling that the largest share of dog owners in Japan is in the age-group 20 to 29 years. All the while, Japanese over the age of 60 are barred from adopting a pet from animal welfare organizations, despite research identifying the positive correlation between pet ownership and well-being among elderly people.

Overall the urban and rural differences in pet-keeping norms as well as understanding of animal welfare are significant, but academic discourse has so far paid less attention to this bifurcation in norms. And last but not least, it is important to point out that while mental health problems are becoming less stigmatized and more recognized in Japanese society, animal hoarding is also becoming a more widely identified problem as well.