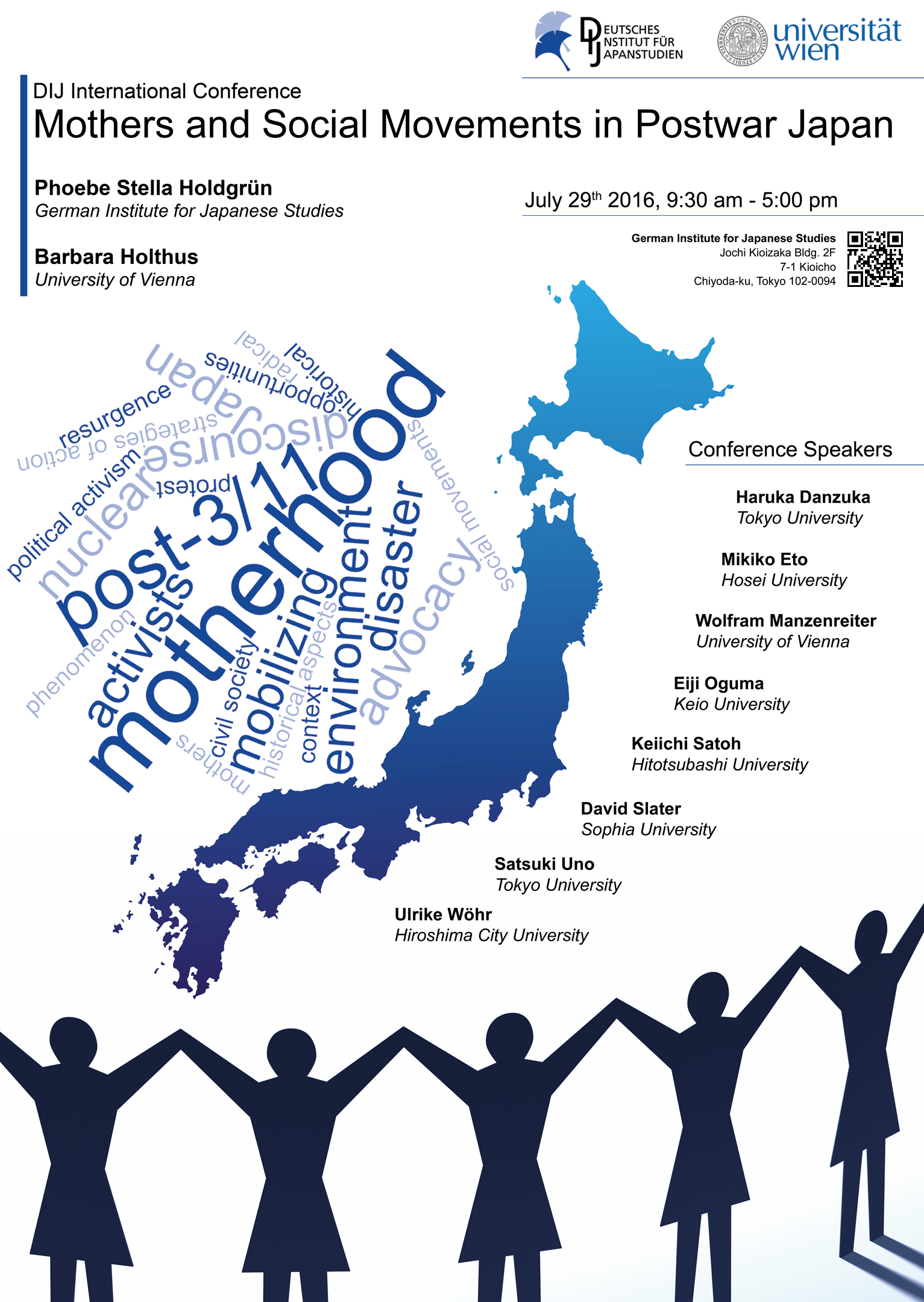 Mothers often play an important role when it comes to social movements and political activism, in Japan and elsewhere (e.g. LeBlanc 1999, Dandachi 2015, Lieberfeld 2009, Edmonds-Cady 2009). Motherhood is seen as an important mobilizing factor for people to become active in social movements and protest activities. This is particularly true for activism in relation to environmental pollution (e.g. Minamata and Chernobyl), consumer issues, and food safety. Now with the triple disaster of March 11, 2011 having triggered a resurgence of social movements and protests in Japan, it is again mothers who have a large share within these movements. The academic interest in social movements and civil society has substantiated the importance of the role of mothers within them. Research is mostly conducted through small-scale, case study-type analyses. The studies however remain scattered throughout diverse publications and are theoretically diverse.

In this conference, we aim at bringing together several of the researchers who study mothers as activists in social movements in Japan, with a particular focus on, but not limited to, activism after 3.11. Our objective for this conference is threefold: (1) We provide an opportunity for discussing motherhood as a distinct category (and cause) in shaping activism in contemporary Japan. We aim to reassess and contextualize the phenomenon of motherhood and activism in light of the most recent developments post-3/11 and possibly also for future research for the Kumamoto/Aso region. (2) The conference combines different perspectives and disciplines for the study of motherhood in Japan, including historical aspects of mothers in movements during the 20th century, and providing three case studies of mother groups in the post-3.11 movements, discussing issues such as motivations, strategies of action, framing and organization of mother’s groups as well as political efficacy. (3) Beyond providing a platform for an in-depth conversation and networking among the participating scholars, this conference will also provide a foundation for a special issue on the topic of mothers, motherhood and social movements in Japan. Participants of the conference will be invited to contribute to this issue.

10:00
Theoretical, historical, and quantitative approaches to mothers and social movements in Japan

Mothers and social movements in postwar Japan: A theoretical overview

Discourses on motherhood in Japan: feminism, ecology, and nuclear power in the 1980s

Mothers as activists after 3.11: The quantitative approach

14:00
Ethnographic case studies of mothers as activists in post-3/11 Japan

Case study 1: Mothers as activists within the affected areas

16:00
Comments and wrap up: Social movements and motherhood in Japan