/ Research / Employment of the Elderly, the Ageing Workforce and HRM 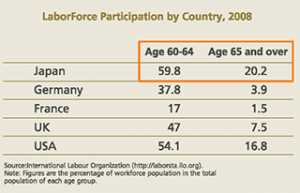 Employment of the Elderly, the Ageing Workforce and HRM The labour force participation of the elderly in Japan can be considered extraordinarily high by the standards of other developed countries. As demographic change is forecast to lead to a shortage in skilled labour in the medium term, the fact that 20 per cent of people over 64 years of age are still part of the labour force is widely seen as a strategic advantage. The promotion of employment of the elderly is considered an option to adapt to the challenges of demographic change.

In the first part of the research project Volker Elis deals with the debate about employment of the elderly in Japan by analysing the measures and aims of Japanese employment policy against the backdrop of the changing socio-political conditions in Japan. In addition, he also examines the economic situation and the motivations of elderly people in the labour market.

In the second part of the research project, Florian Kohlbacher deals with the issues of labour shortage, attrition of skills and knowledge as well as the implementation of suitable instruments and strategies of human resource management to cope with an ageing workforce. In this context he examines the challenges and opportunities, in relation to the employment of older people, both from a company and an employee perspective.