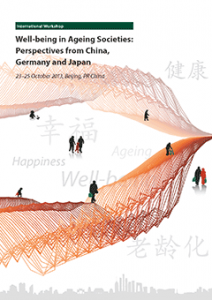 Well-being in Ageing Societies: Perspectives from China, Germany and Japan

Three countries, three socio-political systems, one challenge: To secure a satisfactory level of well-being under conditions of population ageing. We have here two medium-sized countries, Japan and Germany, and the most populous country in the world, China. Taken together, these three countries account for 21.92 per cent of the world’s population and 23.28 per cent of global wealth (as of 2013).

Germany as a European early industrializer had a comparatively long time to adjust its welfare systems to changing population developments. Japan was the model catch-up nation that led the way among East Asia’s “flying gees” towards development, but had much less time to build a welfare state capable of coping with an ageing population. And in China, the present-day economic growth champion that its leaders until recently described as a developing country, the process of population ageing is happening at an even higher pace. The dependency ratio in 2050 is projected to be a startling 74 per cent in Japan, 59 per cent in Germany, and 41 per cent in China – a prospect that must be a serious concern for social planners in all three countries. Two of the three countries are highly urbanized, while one is still largely rural. China, with an urbanization rate of some 50 per cent, is well behind Japan’s 91 per cent, whereas Germany (75 per cent) occupies a position midway between the two. However, urbanization is proceeding rapidly in China.

The countries’ economic systems – characterized as “social market economy”, “corporate capitalism” and “state capitalism” – differ from each other, as do the systems and levels of social welfare provisions. Yet, these and several other differences notwithstanding, the population dynamics of the three countries exhibit certain parallels. This in itself is a matter of great interest, for we cannot but notice that the two East Asian countries – one of which for a long time has had a much more invasive population policy than the other – converge if we look at the birth rate development which, moreover, shows the same tendency in the third, European, country of our comparison. Furthermore, medical and hygienic progress has led to remarkable life-expectancy gains in all three countries. While this is an undeniable success, the rapid transformation of the population structure brought about by ageing in conjunction with low fertility brings in its wake unprecedented challenges for the societies and governments concerned. Since these challenges are genuinely new in the history of humanity, it is prudent to try to understand these developments by comparing even very diverse countries, because different settings give rise to different innovations and solutions to problems. Intellectual exchange about these matters can only be beneficial. It is from this point of view that the first international workshop on Wellbeing in Asian Societies: Perspectives from China, Germany and Japan was convened.