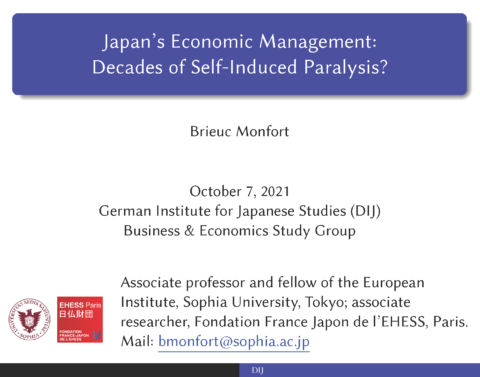 Back in the 1970s, Japanese policymakers earned the reputation of being the most competent within advanced economies for successfully weathering the second oil shock. Where has this reputation gone? The high growth of the late 1980s proved to be transient as a succession of financial crises led to the “lost decade” of the 1990s. Ben Bernanke (1999) famously described the initial measures to fight deflation that would dominate the 2000s as “a self-induced paralysis”. A more forceful set of policies called “Abenomics” in the 2010s ultimately failed to achieve its ambitious goals of 2% GDP growth and 2% inflation, a shortcoming blamed on either error in design or pusillanimity in implementation. This presentation focuses on three cases (the lost decade, Abenomics, Covid-19) to discuss to what extent the narrative of a never-ending crisis reflects hindsight bias, theoretical assumptions, and narrowly defined comparisons. Details and registration here