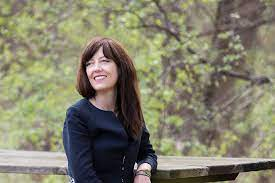 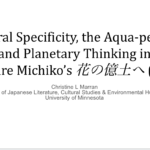 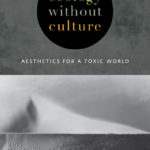 Ishimure Michiko is best known for her writing on mercury poisoning of the Shiranui Sea in and around Minamata, Japan. Yet, in her later years she became increasingly invested in the concept of the planetary. In this talk, Christine Marran examined this shift in Ishimure’s writing and the complicated role that cultural forms play in writing that is especially invested in planetary health. Marran introduced the concept of the “biotrope” as a useful tool for analyzing Ishimure’s attention to cultural and material elements in this discussion of Ishimure’s final work “Hana no okudo e” (2014) in which culturally specific elements are ultimately subsumed by a planetary philosophy. She offered a dense analysis through the lens of Eduard Glissant’s “Archipelagic Thought” and revealed fascinating linkages to post-Fukushima nuclear criticism and postcolonial literary research. Marran concluded her discussion by addressing the ways that area studies may or may not be compatible with particular forms of ecocriticism.

Marran’s talk was attended by 40 participants from Japan, Canada, the US, and Europe, including students and established experts in the field, who contributed to a lively discussion.

Christine L. Marran is Professor of Japanese Cultural Studies at the University of Minnesota where she is also Co-Convener of the Environmental Humanities Initiative. Selected works regarding ecocriticism include Ecology Without Culture: Aesthetics for a Toxic Age (University of Minnesota Press, 2017), “Planetarity,” boundary 2 (2019); “Literature Without Us,” in Ishimure Michiko’s Writing in Ecocritical Perspective: Between Sea and Sky (Lexington Books, 2015); “The Domestic Turn in Ecocritical Writing: Ariyoshi Sawako’s Cumulative Pollution,” Poetica (2013); “Animal Stranger in a Tokyo Canal” in Japan at Nature’s Edge: The Environmental Context of a Global Power (2013); “The Nature of Contamination: From Minamata to Fukushima,” Asia-Pacific Journal: Japan Focus (2011).