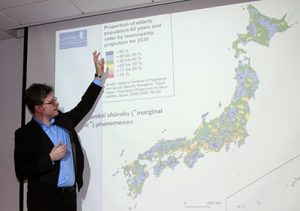 The lecture will be given in English. It will take place on Thursday, March 7th 2013 at 6.30 p.m. at the DIJ.
Admission is free but please register by email with: forum@dijtokyo.org


Shrinking Rural Communities in Japan: Community ownership of assets as a development potential?

Non-metropolitan areas in Japan are most severely affected by the on-going depopulation and demographic ageing. The fast-spreading “marginal settlement” (genkai shūraku”) phenomenon refers to communities that are no longer viable as more than half the population are 65 and older. This challenge requires a fundamental shift in Japan’s policy response to trends of regional abandonment and collapse. Former development strategies based on the 1965 Mountain Village Promotion Act or the 1970 Emergency Act for the Improvement of Depopulated Areas obviously failed.

The paper aims to analyse current and future economic and socio-demographic challenges facing shrinking regions in Japan, and to assess the development and institutional context of related government policies. It argues that local communities should abandon the expectation of externally induced revitalisation and concentrate on asset-based community development. Giving communities the opportunity to capture the gains from public goods (e.g. natural endowments like land, wind, water) as well as private assets could improve the prospects for local livelihoods and quality of life. Community ownership of assets can be an important means to facilitate local engagement, foster local place attachment and thereby strengthen rural community resilience. Based on case studies, the paper provides some empirical evidence for this policy approach. It requires local communities to become more independent from central government influence and to integrate the people into locally based development policy and planning processes.

Thomas Feldhoff is Adjunct Professor in the Department of Human Geography and Academic Coordinator of the Interdisciplinary Centre for East Asian Studies at Goethe University Frankfurt. With his background in human geography, his current research focus is on the spatial dimensions of processes of demographic ageing and shrinking and the political economy of energy and food security issues. He has published widely, most recently: (2012) Shrinking communities in Japan: Community ownership of assets as a development potential for rural Japan? In: Urban Design International, published online in UDI http://www.palgrave-journals.com/doifinder/10.1057/udi.2012.26.