/ Events / Gender and Sexuality in East Asia – Cultural Studies and Social Science Perspectives / The Taboo of All Taboos: Regretting Motherhood in Japan 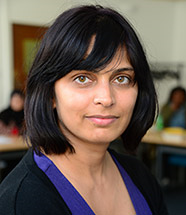 
The Taboo of All Taboos: Regretting Motherhood in Japan 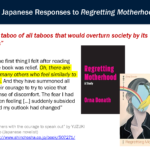 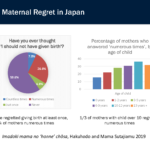 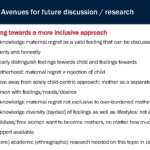 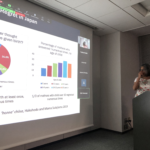 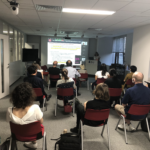 The publication of Hahaoya ni natte kōkai shiteiru (Regretting Motherhood) in March 2022 attracted significant attention in the Japanese press, broadcast and social media. Segments on NHK’s television and radio stations were devoted to the book and the reaction it provoked. Articles in publications such as the weekly Bunshun magazine published excerpts and there was much discussion on Twitter under the hashtag #母親になって後悔している. This follows waves of interest across the globe since the book, by Israeli sociologist Orna Donath, was first published in 2017 and subsequently translated into multiple languages across Europe, North America and Asia. Donath’s provocative study has caused outrage as well as earned praise for its tackling of a subject that remains a taboo in many societies, not least of all in Japan: women who express regret for having become mothers. The voices of the many Japanese women who have expressed empathy with the subjects of Donath’s research are particularly striking.

This talk introduced Donath’s work, focusing in particular on the book’s reception globally and in Japan, and what it reveals about the contemporary notions and conditions of motherhood in a society in which the low birth rate continues to raise alarm. Mithani addressed how unpacking the taboo of maternal regret can reframe discourses of womanhood and motherhood, be they social, political or academic. This included an analysis of social media responses in the context of the ideological concept of motherhood (bosei) versus social reality.

More than 70 participants followed Mithani’s talk online and on-site. It was followed by a lively Q&A session which focused on commonalities and specifics across different countries, the difficulties (and necessity) of distinguishing between maternal regret and the love towards one’s children, avenues for future research, and social policies fostering diversity and acceptance.

Forum Mithani is a British Academy Postdoctoral Fellow at Cardiff University and Visiting Research Fellow at Waseda University. She received her PhD from SOAS (University of London) in 2019. Her research focuses on Japanese media, literature and popular culture, gender, motherhood, feminism and social minorities. Recent publications include Handbook of Japanese Media and Popular Culture in Transition (co-edited with G. Kirsch, MHM Limited, 2022).