/ Events / DIJ Forum / Who pays for whom? Intergenerational Transfers in Japan and Germany 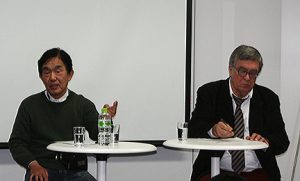 
Who pays for whom? Intergenerational Transfers in Japan and Germany

Population ageing tends to increase the share of financially dependent members in a given society, which is why it is often assumed to be a trigger for generational conflict. The data on this question paint an ambivalent picture. On the one hand, in many post-industrial economies, today’s younger birth cohorts are put at a disadvantage in the labour market and also in terms of public sector spending compared to older cohorts. On the other hand, there is a tendency of private transfers inside the family to flow downwards – from old to young. It appears that a potential generational conflict in the public domain (welfare state, labour market) is at least partly balanced in the family domain. To what extent this is the case will be analysed by using data from National Transfer Accounts, an internationally harmonized macro-level database of financial intergenerational transfers.

Naohiro Ogawa is a population economist who specializes in studying the effects of demographic change on economic growth and social security systems. Aside from economic impacts of low fertility and rapid population aging, his research has included a variety of other population-related issues, such as family organization and values shifts, assessment of policies regarding employment, marriage, retirement and care for the elderly. Professor Emeritus at the Nihon University College of Economics and Project Professor at the The University of Tokyo Graduate School of Economics, Ogawa has published numerous academic papers in internationally recognized journals and has edited and authored a large number of books. Currently, aside from his professorial duties in Japan, he serves as the Chair Holder at the Social Security Research Center, the University of Malaya and a member of the BlackRock Retirement Institute Advisory Council.

Gerhard Naegele has been a professor of gerontology at the Technical University of Dortmund, Institute of Gerontology since 1992. From this angle, his main research fields include migration and integration, family and children, society and solidarity, health, working life. Regarding Japan, he is especially interested in the role of municipalities and local communities in the response to demographic ageing as well as practises of retirement in intercultural comparison.

The talk by Professor Ogawa focusing on Japan will be followed by comments from Professor Naegele introducing the German perspective, before the floor will be opened to the audience for a Q&A session.