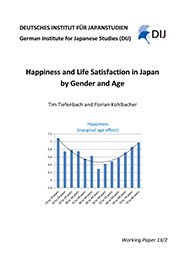 Subjective well-being, especially measured in terms of “happiness” and “life satisfaction”, is increasingly considered an important policy goal around the globe. The fact that the Japanese government decided in 2010 to focus its annual survey, the National Survey on Lifestyle Preferences, on happiness and its determinants is just one indicator of this importance also in Japan. Based on the most recent survey data from the years 2010 to 2012 this study analyses happiness over the lifespan with a special focus on gender differences. An analysis of the happiness level over the lifespan is especially interesting in the case of Japan, since the country is known for its relatively traditional, rigid social structures with predetermined life courses and carrier paths. Furthermore, research has revealed strong gender differences across various social indicators in Japan and these differences are also reflected in the correlates of happiness. Although previous happiness studies in Japan have also included gender in their analysis, the present study is unique in two respects: First, the underlying dataset is not only the most current one available for Japan, with over 9000 observations it is also very comprehensive. Second, in a subset of the data not only the “happiness level” but also the “life satisfaction” of the respondents is recorded, which allows a unique differentiation of the two concepts stratified by gender. Results indicate for example that while household income affects happiness and life satisfaction equally for men and women, the latter show a stronger negative correlation with life satisfaction when having no savings. Overall, the present study provides the first overview of recent happiness and life satisfaction data in Japan from a gender and age perspective.